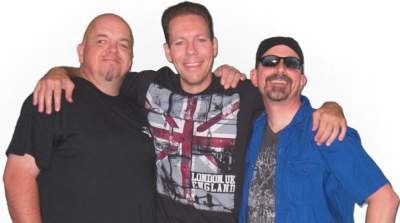 Unified Past is a power progressive rock band from Syracuse NY. Guitarist Stephen Speelman posseses a master’s degree in classical guitar performance, bass player Dave Mickelson is currently a member of Joey Belladonna’s Chief Big Way, thunderous drummer Victor Tassone has also appeared on several independent artist releases, and they have now added Vocalist Phil Naro for their next CD release – summer of 2015. There is most certainly plenty of chops to be found in this band’s music. But as powerful as this band can be, their overall sound focuses more on melody and song composition than it does on technical gymnastics.
Unified Past’s 2013 release, “Spots”, on Melodic Revolution Records (MRR CD 22005) was their most gripping recording yet and connected with all fans of progressive rock. Their next release promises to deliver 6 power prog compositions clocking in at 55 minutes.
Blending seventies style progressive rock with modern day progressive influences, Unified Past delivers a unique and identifiable sound all of their own. If you are a dedicated fan of progressive rock music then Unified Past is for you.

Music from Unified Past