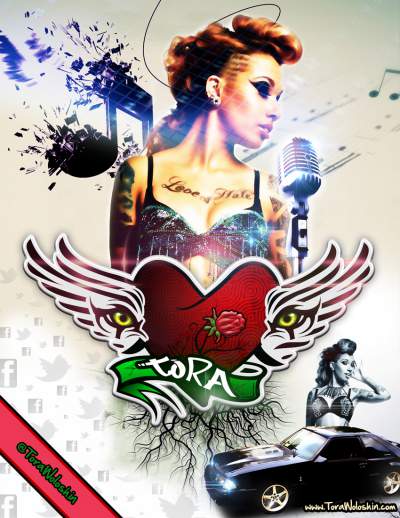 If the clone of Lady GaGa and Mariah Carey were to crash the Warped Tour during a One Republic tribute to Michael Jackson, it might be close to the vibe you’d get when Tora Woloshin takes the stage.
As seen on the first season of X Factor USA, The Tucson Arizona based and LA born recording artist Tora Woloshin is an emerging force on the Pop music scene. With explosive live shows featuring her sexy and soulful vocal tones, she performs her emerging hit making original material. Tora has developed a musical style that is a hybrid mix of elite influences all over the genre grid.
Not only musical, Tora has many hobbies such as: Farming, Training horses/dogs, Racing cars, making stage wear for her performances and has also been professionally dancing/choreographing for over 15 years.
America saw Tora on the inaugural season of Fox Television’s hit reality show, The X Factor USA. She opened the season by wowing all 4 judges with her rousing rendition of the Jackson 5 timeless classic, “I Want You Back.” She was one of the top 32 contestants/top 8 girls put through to the “Judges Homes” round where she continued to fine tune her skills and was mentored by Simon Cowell who called Tora a “little rock star.” Following X Factor, Tora signed with Fli Life Music out of New York and Miami, who released Tora’s first single, “Guns & Roses,” in June of 2012 with a strong response from fans and those in the music industry. The song was produced by the dynamic Los Angeles based duo, The Fliptones. Tora ended her contract with Fli Life in 2013. After touring with grammy nominated artist, B.o.B., Tora opened for Ne-Yo and soon after, then started her world tour in China.