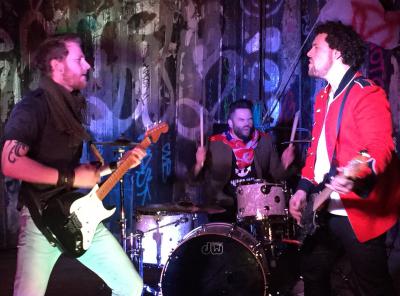 A fistfight between 90’s Grunge and 80’s Metal broken up by AC/DC.

From the ashes of short-lived outfit ‘The Bare Bones’ – Kevi Metal (vocals) and Waka (drums) continued to jam irregularly through the latter part of 2014 and slowly honed a set of angry, raw songs into things of rock and roll beauty. Four of these songs were recorded in November 2014 with legendary engineer Paul Matthews of “I AM GIANT” fame at the helm and are soon to be released as the “Batteries Not Included” E.P. Now joined by Sam Halen on guitar, Tokyo Rock Machine are roaring out of West London slaying audiences with back to basics hard riffing guitars, powerhouse drumming and soaring vocal hooks.