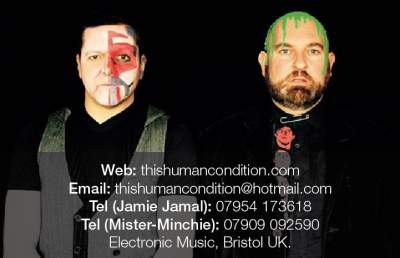 Jamie Jamal & Mister Minchie met at a Songwriters Circle in Bristol in 2012, (A support group for songwriters set up by Minchie)
They collaborated on a few tracks going to open mic’s around Bristol, even performing some songs together. In January 2015 they decided to form This Human Condition encouraged by peoples feedback saying they worked well together.
Since they had already been helping each other out, on their solo projects & collaborated on a handful of songs for various projects, “I know Pain”, “Sapphire”, and “Pride In All Of Us” the latter a song for the Rugby World Cup 2013. That song went on to feature on an album called “Be There Feel The Rush” put together by Quentin Burton from Jumping Joint Records. In May 2015 THC signed to New Yorks independent label Teknofonic who deal with the digital side of releases. Essentially a digital distribution service. THC say they are part signed but mostly D.I.Y and are responsible for the physical releases and every other aspect except digital releases. This keeps them in charge of their music. THC spent the rest of 2015 and early 2016 working on their debut album “Project Zero” with a focus on quality recordings. Paying for professional Mastering from Paul Whitrow at The House Of Dreams. THC ran 2 successful Pledge Music campaign’s to fund some of the EP – Rise (Released June 2nd 2015) and LP – Project Zero (Released April8th 2016) Both through Teknofonic Recordings (Digital) with CD’s organised by THC part funded by Pledge Music. Project Zero is available on most digital and streaming platforms around the world on their website and in some independent music shops around the UK including (Rise Independent Record Shop in Bristol, Hamilton House, Stokes Croft, Bristol, Swordfish Birmingham &Trading post, Stroud)
THC have gained support from Tom Robinson and been introduced on BBC Introducing playing Rise on his BBC 6Music show and including it on his Personal favourites Mixtape.
Rusty Egan had played Brother Blue & Telepathic Heights on his “Electronic Family Tree” show.
Scottish DJ & Journilist Jim Gellatly played Telepathic Heights on his New & Emerging show on Amazing Radio.
​Local Radio stations – BCfm ran an hour long show on their prime time Saturday night show “Streetmaps” interviewing THC and playing 5 tracks from the band and talking to them about their music for an hour.
Phil Hodgson from Apple fm has supported THC and played several songs.
Steve Parkhouse of Jelli Records has played THC on his show several times, that show goes out on BSRfm, Somer Valley fm, Wire Radio & Longside Radio.
​Bristol Music show (BMS) played the Psychotropic video on their first series on Made in Bristol TV.
Support from overseas including Radio & Podcasts. Radio Coolio (Canada) Artefaktor (Mexico) Skerat-Synthtopia radio show(Australia)
Revival Synth have featured Brother Blue and Telepathic Heights on their weekly top 5 list. Plus links to the Video for Telepathic Heights on their front page.
Interviews and reviews from Songwriting Magazine, Shining Lights (George Ladds), Brian Ingilis from Jelli Note (Jelli Records)
THC were asked to support Justin Utley for a Bristol Pride fundraiser in April 2016 and helped raise money for Pride 2016.
THC have played Bristol stages such as The Lousiania, The Fleece, The Bierkeller, and headlined for the Trans/forms event in Hamilton House in Bristol’s Trendy Stokes Croft.
THC are currently in talks about putting on some future gigs.

Music from This Human Condition