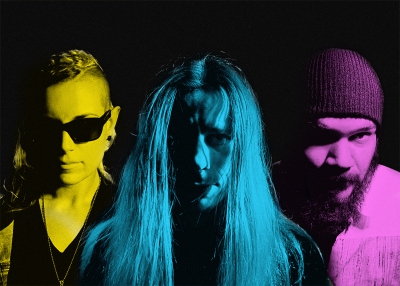 THE VON is an American Indie/Electro/Rock band from South Florida formed in 2012 by vocalist/bassist Luis Bonilla and guitarist Marek Schneider. For much of their career, the band has been a trio with drummer Elisa Seda, who replaced their former drummer after the recording of the band’s upcoming album (2015). All three members came together and formed a bond by talking about their favorite rock n’ roll legends; bands that are now big influences in their music. These passions are at the forefront of what the band brings to the crowd with their energy which is nothing short of contagious; they are not just a band but an experience.

In 2015, they will release a brand new album entitled, Ei8ht. The album digs deeper into musical influences and infusing of their diverse cultures, yoga ideology, and overarching themes of living life fearlessly. Ei8ht was produced by Bonilla and mixed and mastered by Grammy Award winning engineer, Carlos “El Loco” Bedoya. By the beginning of 2015, THE VON released their first single Nothing to Fear, soon to be followed by other single and releases this year. Currently, the band is performing intensely throughout South Florida and working on a National and European Tours in 2016.

Music from THE VON