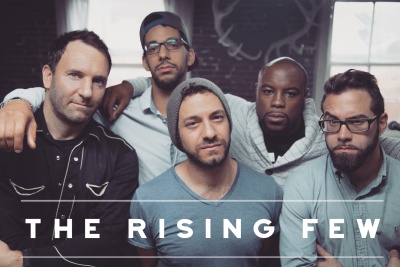 When professional illustrator Karim Terouz left his hometown of Cairo at the age of 25, he not only made the ballsy decision to brace the blistering Canadian winters, he also chose to seek out a whole new career path in Montreal, QC.

Turning to his true passion – songwriting – Terouz began visiting every open mic night imaginable, which is how he came to discover Hubert Tremblay (Guitars).They got right to work on Karim’s songs and the rest of the members Andrew Sudlow (Bass), Isaac Gesse on Trumpet and Harvey Bienaimeé on Drums, completed the band for their first payed gig as The Rising Few.

Boosted by A first place win at the LME showcase competition (http://www.landmarkevents.net) in which the band beat out 200+ others for top honours, The Rising Few unveiled its first album, Sinners on St-Laurent, produced by the great Glen Robinson whoms mixing and mastering credits have been involved in projects with Dave Grohl’s Probot, The Ramones, The Steve Miller Band, David Bowie, AC/DC, Keith Richards, The Tea Party, Ringo Starr, The Beach Boys and many more over the course of his career.

The Album and Karim’s story captured the attention of The Gazette (Publication),CBC radio and Music Plus (Television).

“Since my schedule as a bartender was the dominant headline of my new lifestyle, I decided to write about it,” says Terouz. ”Sinners on St-Laurent” is really a lyrical testament to emancipation, it’s the new stranger in town re-discovering sultriness through the nightlife of Montreal.”

The Band just launched their taunting new single ”Big Boy Games”, a high-energy, bouncy rant song that takes The Few into a complete left turn from their folky, acoustic beginning to make their sound a more raunchy, stadium worthy rock spectacle.
They are opening for Jerry Mercer and Gary Moffet (April Wine) on December 12th, 2015 and their new Ep ”Adult Entertainment” is set for release in May 2016.

“Self Managed and unsigned, it can only be a matter of time before the weasels sniff this one out” – FYI music.

Music from The Rising Few