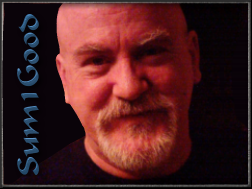 I’ve been a Musician now over 40 years. I’ve Jammed and sang onstage with BB King (by his invitation) and as of 2013 I am now among The Top 50 Artists on The USA Indie Music Artists Chart.
My **ALL ORIGINAL MUSIC** career began in 2012 and has already earned me thousands of fans in over 87 Countries and constant global radio play 24/7.
Like my music? Let me and others know by making a Profile Comment, OK? Thanks for dropping by, and all the best to you! – Sum

My name is Mark O’Dwyer. better known worldwide as “Sum1Good,” a name I chose to go by in the music industry largely due to the fact that my real name is usually mispronounced and almost always misspelled by others! I tried to keep it as simple and memorable as possible, and it seems to have worked out fine in that regard!

I am 59 years young, currently residing in Arizona but lived most of my life in New England where I was born. I began playing guitar and singing at a very early age, and by my late teens and twenties was playing guitar and singing solo onstage in pubs bars and night clubs from Hartford Connecticut to Martha’s Vineyard Massachusetts. My repertoire back then however was comprised almost entirely of famous artist cover songs from the 60’s through the early 80’s, and I rarely played my own music onstage at all. One very notable exception was when I attended an outdoor concert of approximately 4000 people while carrying my brand new Gibson Les Paul guitar case near the stage to watch BB King perform up close. I say “notable” because he saw me, asked if i could “play that thing” and when i laughed back “yes,” he invited me onstage and let me jam with him and the band on three songs of my choice, one of which was my own 12 bar delta blues song! : ) Great man BB King, generous and kind and down to earth, gotta luv that! : ) But that was my “15 minutes of fame,” literally, and for me a hard act to follow! : )

Times got hard for club artists doing covers, i got married, took a “normal job” outside music, and eventually worked my way up the business ladder till i owned a marketing business and raised a family. With that behind me now, however, I turned my focus directly back on my first love… music creation and sharing music. By now though there were computers, and as a musical instrument, i can do things with a computer that few standard musicians can do, including being an entire band at once, which opened unprecedented creative doors to me, and I am pursuing that strictly via my own music from here on out!

Learn how to get your song on itunes at ReverbNation.com