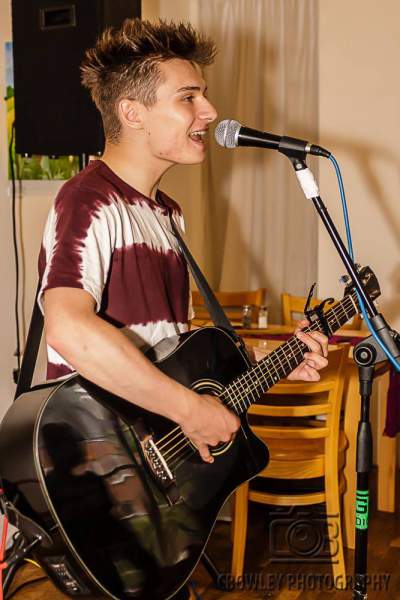 I am a solo artist from Redditch, Worcestershire. My music style is a blend of punk, pop and indie, and I write about my experiences growing up in the twenty-first century. My song ‘I’ve Seen It All’ was handpicked by Tom Robinson for his BBC Introducing Mixtape on BBC Radio 6 in September 2015. I have had a total of eleven different original songs played on BBC Introducing, including on my local station BBC Introducing Hereford and Worcester. In November 2015, I did a BBC Introducing session and performed four original songs, which was aired on my local station. In 2016, I was shortlisted by Jamal Edwards MBE (founder of SBTV), Maisie Williams (Game Of Thrones), and Rob Da Bank (Founder of Bestival) in 2016 to open the main stage of Bestival along with nine other artists. At age sixteen, I was also shortlisted by Birmingham Mail and the Barclaycard Arena to open for James Blunt at the Barclaycard Arena.

I’ve done an abundance of gigs and festivals across the West Midlands and beyond. I have performed at the NEC in Birmingham as part of the National Rock and Pop Festival. I’ve also performed at Rock the House at The Bedford in Balham, South London after being put forward to represent my constituency by my local MP. As well as this, I’ve played at the O2 Academy in Birmingham three times, The Robin 2 twice in Wolverhampton supporting Dave McPherson of InMe, and It’s A Beautiful Day from San Francisco. I’ve also played at numerous festivals including Sunshine Festival, Godiva Festival, Morton Stanley Festival, Worcester Music Festival, Severn Sounds Festival and more. I’ve had a lot of press and media coverage over the last few years. I was featured as Band Of The Day by Counteract Magazine in 2014, and regularly have features in the Redditch Standard and the Redditch Advertiser.