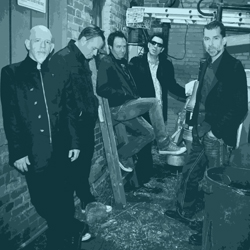 Strangely Alright is a 5 piece Power Pop Band from the Seattle, WA area that has, as Rockford Rowley from The Weekly Volcano says, “an undeniable emotional appeal. Ringing, triumphant chords and lyrics that allude to conquered tribulations immediately make the music relatable to everyone.” Their song, “Crying Shame” was nominated for the 2013 NWME Song of the Year in the alt/classic rock category and recently SA’s music was included on the hit Seattle sketch comedy show “The 206″.

And there is more than just music to SA. Realizing there is plenty of bad news in the world today, they decided to showcase and focus on the good things being done by cool, compassionate people everywhere. Regan’s created an interview style TV show he hosts with keyboardist Raymond Hayden (Strangely Alright TV) about people, places and things from the great northwest that are a little left of center. Folks who are taking a path that is uniquely their own. And there is also a SA online magazine and a children’s picture book in the works…