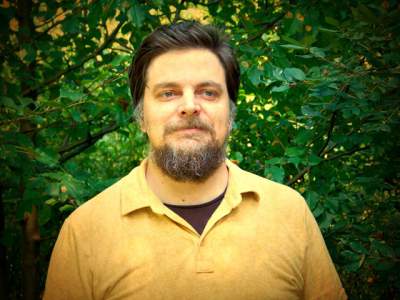 Steve Wilkins has never been in one place too long. Born in Kentucky as the son of a Methodist pastor, Wilkins has lived in the coastal regions of southern New Jersey, the flat landscape of Illinois, the mountainous regions of the Poconos, & the rich farmland of Lancaster county, before finally settling in the outskirts of the metro city of Harrisburg, PA.

Similarly, Wilkins’ musical landscape is a hybrid of prog rock, emo, electronic & 80’s pop. Raised on bands like Rush, Yes, & ELP, the bar for songwriting & technical prowess was set high very early on. Being the youngest of 4 siblings, he was taught to appreciate all kinds of music, from 70’s arena rock like Styx, to the virtuoso guitar performances of Joe Pass & Django Reinhardt, to the unique metal of Voivod. A major turning point came in his early twenties when Wilkins & his brother saw the band Mineral play a small coffeehouse in Lititz, PA. A perfect introduction to emo, Wilkins was hooked and began seeking out & emulating similar bands.

Taking a job at a Christian bookstore in his mid-twenties, Wilkins was glad to find coworkers with high musical standards, introducing him to new artists & genres. Again he was reminded to appreciate various styles of music, with coworkers being into everything from Sufjan Stevens to Slayer. It was here that he was able to embrace musical freedom in the midst of a fundamentalist environment.

Wilkins began developing ideas as soon as they came to him, and soon experienced a personal creative renaissance. He started writing & recording music, building puppets, sketching, rebuilding vintage video game consoles, & even designing ramps for fingerboards. It was an exciting time for him, but not everyone was keen on his newfound abilities, and not unlike the discovery of the guitar in Rush’s masterpiece “2112”, Wilkins was told to forget about his silly whims.

He pressed on, however, & continued to write & record music & play coffee shops around Lancaster, PA, eventually moving to Camp Hill & playing venues in the Harrisburg area.

Wilkins’ debut E.P. No Rain Remain was released in June of 2016, with praise from critics & friends alike. Ric Albano of Modern Rock Review says, “Built on an acoustic-based foundation, the songs on Steve Wilkins debut EP are filled with movement and mood taking on a genre classification of their own.” Since the E.P.’s release, it has been featured on Good Day PA’s Studio Sessions, avalivemusic.com’s Behind The Music, & was a featured debut review on modernrockreview.com. He is currently working on new material and playing shows in the Harrisburg area.