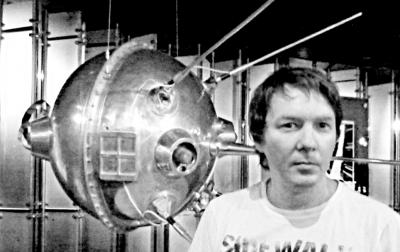 Sounds of Sputnik is Roman Kalitkin, whose debut EP ‘New Born’ was recently released on British label Ear to Ear Records, featuring guest appearances by members of Swervedriver, Brian Jonestown Massacre, Ummagma and OMD. His signature sound mixes post-rock, shoegaze and dream pop with a slight kickback to noise pop. He draws inspiration from My Bloody Valentine, Jesus and Mary Chain, Ride, Sonic Youth, Happy Mondays, and Slowdive. Dubbing himself a “white crow”, the music Roman Kalitkin makes has always gone against trends within his home country of Russia, both as a solo artist and for the 20 years he played in various post-punk, alternative and shoegaze bands. On November 20, Sounds of Sputnik received a Russian Indie Music Award in the ‘Young Blood’ category (only 7 awards were presented across all categories) for the ‘New Born’ EP, which was co-written and produced by Ummagma, as well as an award for Best East European Video at the 2014 Independent Music Video Awards.

Music from Sounds of Sputnik