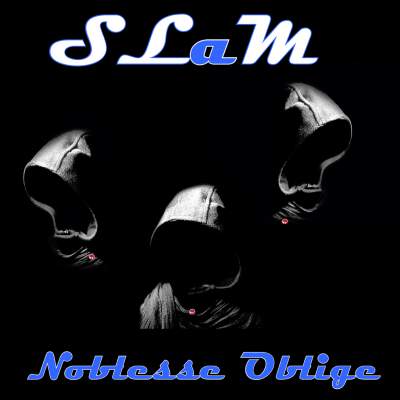 We are SLaM an instrumental Metal band from South Wales in the UK, our Debut EP “Noblesse Oblige” was released on 1st December 2014 to approx 95 Digital Distributors, including iTunes, Amazon MP3 & Spotify. So whats our story?

We are 3 friends that have spent the last 2 decades in & out of different bands with different styles & never really being musically charged, so we decided to form an Instrumental Metal Band & attempt to be Unique in our approach. Why Instrumental? well we have all suffered at the hands of a Vocalist that does not feel appreciated & Vocals can pigeon hole your Music in a heartbeat. So we have agreed to do away with this element & we hope to transcend the majority of the Metal Sub Genre’s & be accepted by nearly everyone.

In January 2014 we got together & jammed out a song that had been pre written with this new venture in mind & then every week from then on we met & practiced until we had the 5 tracks that we were all happy with.

At this point we all agreed that the Music should speak for itself & so we adopted a mysterious approach from the off & we do not reveal either our faces or our names.

That is when things started to get interesting so we sought out a Studio (Sonic Forge, Cardiff, UK) a Studio Engineer (Tim Vincent of Woodcroft Audio) & booked a weekend in November where we could put our skills to the test, that weekend resulted in the first 5 track EP Noblesse Oblige, 3 of which we have included for you.

We hired a professional Photographer & Videographer to complete a Studio Diary of the recording and these guys have helped us portray a level of professionalism not normally associated with underground Bands.

We uploaded 2 songs to Reverbnation & the response has been staggering with us being featured near the top of the Metal charts for South Wales & the UK within just a few days. As a direct result we were approached by an online Gamer who wanted to use our Music when he was doing Walkthroughs & Online Gaming, so we agreed a partnership where he uses our Tracks & we get an increased fan base.

To try & include the fans we send out free stickers & badges free of charge & we have only 1 condition, they take a photo of where they have placed the sticker so we can upload the image to Facebook as a way of connecting with them.

Our plan for the future is a simple one, record a new EP every year & continue to apply to every radio station available to get our Music heard.