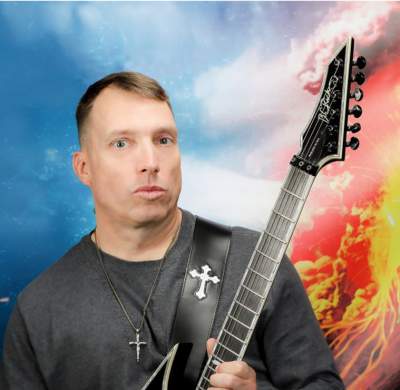 Sigurd Wallsten is a dedication to my Grandfather who played the violin all his life. This project began in 1994 and has continued throughout. I am currently a solo artist writing, recording, and producing Sigurd Wallsten songs in Saudi Arabia due to a U.S. Army advisory deployment. The Roman Battle and Volcano Burst albums are all instrumental projects mostly rock/metal, but some lighter and diverse songs have been included. Because I’m a lead guitar player, these songs were written on the guitar with the supporting instrument parts composed later in the process. All Volcano Burst songs drive from positive energy so don’t let a few of these titles fool you. As for the songs, “Very Far Away”, “Fridays Here”, “Optimistic Fool” and “The Speculator” are positive, up-tempo songs that are intended to be driving and energetic. The songs “Perpetual Rule”, “Party Rock Song” and “The Falcon” are heavier and designed to demonstrate power, driving force. Perpetual Rule is a counter to these song messages that glamorize evil. God and His reign is perpetual. The title track, Volcano Burst is a unique song with slower tempo and steady deliverance. Passion and Mystery is the most diverse song of the 12. This song is the only one not composed on the guitar, it was written on my synthesizer / keyboard. Overall, positive and energetic guitar jamming instrumentals with a diverse sound and production.

Volcano Burst was recorded in El Paso, Texas USA. Because I’m still serving in the military, it takes longer to accomplish projects, but progress is steady.

The project was expertly mastered by Colin Davis from Imperial Mastering.