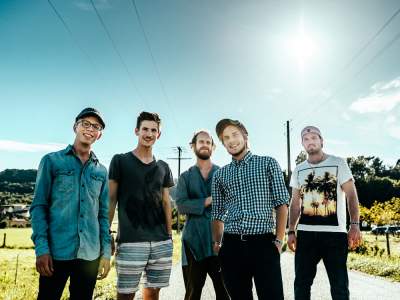 THE SEED TO TREE SOUND:
The Seed to Tree sound, especially live, has been compared to an array of acts: Fleet Foxes, Of Monsters and Men, Damien Rice, and even Mumford and Sons (their old style). Certainly their music evokes a similar folk-pop-rock passion with mesmerising and sweeping melodies, combined with solid vocal arrangements.

Despite all five members hailing from Luxembourg the music proves mystifying for many listeners unable to pin down just where Seed to Tree in the genre spectrum is rooted, although many do say their tunes purvey a slight Irish slant and feel to them. Added to that, the haunting and thought-provoking lyrics provide an extra dimension to the band’s quality songs.

It’s no wonder those that hear Seed to Tree for the first time become hooked and keep returning for more.

A LITTLE SEED TO TREE HISTORY…
It can be said that it was back in 2009 the “seed” of Seed to Tree was planted when Benjamin and Georges began playing guitar and singing together. However the band idea didn’t take root until the beginning of 2010
when Michi the drummer provided the first shoots for Seed to Tree.

The guys leafed through various band names but eventually settled on a Blind Melon track they loved “Seed to a Tree” and so the name Seed to Tree was sown.

2010 was also the year of the band’s first gigs in bars and youth centres and they even blossomed by winning a local band contest ahead of about 12 other acts.

With the acoustic and touch of Irish sound, 2011 saw Seed to Tree virtually become resident at Luxembourg’s Irish pub The Pyg, proving popular with punters and triggering a buzz around them.

It was then that Seed to Tree turned over a new leaf becoming more serious in their approach, their act, song-writing and performing bigger gigs to a more diverse public.

It all paid off, as the band received support and help in several areas including the recording of their first EP released September 2012. The year ended triumphantly with the release of the band’s first single “Broken Down” that went on to spend an amazing 16 weeks in the Luxembourg national charts.

2013 proved to be an incredible year for the band; 2 new branches were added to the tree in the form of keyboard player Jean-Marc Feltz and bassist Benjamin Renz before the quintet played virtually all the major Luxembourg festivals including Food For Your Senses, Rock um Knuedler, e-Lake, Mess For Masses and the biggest of the all – main stage of Rock-A-Field.

In the same year Seed to Tree released two more singles from their EP “What Would You Do?” and “Pine cone”. Both songs achieved a lot of airplay and did well in Luxembourg charts. The band was also chosen to represent Luxembourg for the Greater Region Multipistes project helping to support and train promising local talent.

2014 began in the same light proving that Seed to Tree are not about to lose steam! They played several exciting concerts and festivals both in Luxembourg and abroad and supported acts such as Jacco Gardner and Kodaline. A fourth single “Lonely Leader” was released by popular demand as it already received a lot of airplay without the band promoting it! The song reached 11 in the national charts.

At the end of August Seed to Tree went to La Chapelle Studios in Belgium to record their first album released in Luxembourg in early 2015 in front of 800 people!

And so the stems of Seed to Tree’s humble beginnings are starting to bear fruit with exciting prospects for the coming years.

Music from Seed to Tree