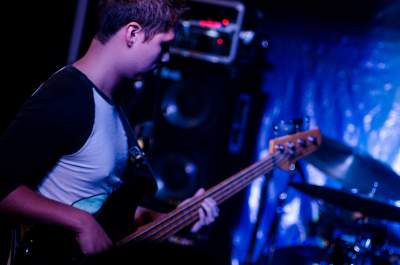 RUNTOLIFE is an Alternative Rock Band from Mexico that has been taking over the Anglo- Indie scene by attending and performing two years in a row at the Hollywood Indie Music Channel Awards ceremony, taking the stage this year at the legendary GRAMMY Museum in Los Angeles CA.
The band was formed by Front-Man Hiram A. Lopez in company with Carlos Cortés, Mayolo Sotero & Jose Ramón Garcia in 2007, they released their indie Ep’s “Catching The Sounds Around” & “Building Your Feellings” until they entered to Bemba Records leaded by Osvaldo Flores to record their first studio album titled “Can’t Write Love Songs” with special arrangement on percussion and drums from David Arillo, launched digitally worldwide in 2011 and physically in 2014.
Following by a third Ep titled “Unbeakable” produced acoustically by Rafael Rosas, Hiram A. Lopez & Hector Sahit at Zonnart Studios in Cuernavaca, meanwhile the band parted ways it turned as a solo-project, as an attempt to save the band Hiram invited some friends to join the project such as Bruno Texon and Felipe Polanco from Xalapa, Vicenzo Accocia from ITALY & Arturo Naranjo from Mexico City with Jazz skills. However the band lined up just for Arturo & Hiram, plus Ivan Arteaga on guitar and a drummer unofficially.
The band has made waves in the indie scene with fans all over the world and music industry insiders taking notice, being considered to play at festivals in Africa & United Kingdom but recently had shows in Europe & Cuba, also Hiram has returned as victorious finalist of the Musicathon 2016 in Berlin, Germany, while pushed Runtolife to get a major distribution for “VOLUME I” of their self-titled upcoming album through Certified Diamond Records & Universal from Los Angeles, CA.
The band Influences are: Matthew Good, Finger Eleven, Sevendust, Vertical Horizon, Pete Yorn, Jon Foreman, Gemma Hayes & Danielle Brisebois among others.