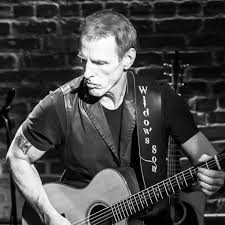 RJ Comer is a Los Angeles city boy with swamp water in his veins who started out singing in church and around the campfire, but ended up in a lot bad places at wrong times. His brand of Americana & Blues reflects the kind of man he is and was – a tough guy with a tender heart, a lover, a fighter, and a joker, a man who confesses “I should be dead or in jail instead of living a life so good.” From downtempo gritty songs that cut deep with self-deprecating humor and jagged memories to upbeat songs that swagger even when they swing, RJ’s music is both meaningful and entertaining.

As a solo artist RJ steps away from the flamboyant party that is the Dance Hall Pimps and relaxes into a much more personal, intimate, and sometimes confessional vibe. RJ’s debut solo EP Hell Hole Swamp is a collection of five original swamp songs produced back and forth between Los Angeles and Lafayette, Louisiana. Notable producers and players include True Blood and Treme’ contributor C.C. Adcock, Artelius Mystic, and the legendary Stanton Moore. RJ intends to release a series of EPs, each EP exploring one of his many styles of Americana and Blues. Expect forthcoming EP collections of Americana Rock, Blues, and a two-song special edition EP with A.J Croce.