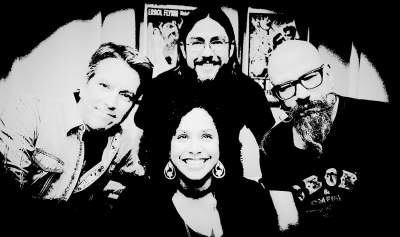 Play Hot Lava is taking listeners on a sonic joy ride – rolling out fresh, original, infectious power-pop in the tradition of Big Star, Cheap Trick, the Pretenders or REM.

Principal songwriter and bass player Craig Anderson began working with guitarist Casey Pollock as backing-musicians-for-hire for a roster of country artists in Nashville. With the addition of drummer Keefer Dickerson, the trio began working on arrangements for Anderson’s original rock songs.

Once the tunes had wheels, they needed a voice to drive them. Lead singer Tracee Perrin was added to the mix and Play Hot Lava was born.

Weekly rehearsals and gallons of coffee produced an initial batch of songs ready to be heard. After only their third live show, the band was offered the opportunity to record at famed Blackbird Studios, resulting in the debut single, “Between The This & The That.”

An honest-to-God, old-school, vinyl 7-inch record was pressed, with the quirky & hook-heavy, “Plaid Blimp TV Show” as the B-side; and the emotive, “Lonely As A Baseball Field (In The Wintertime)” available as a downloadable bonus track.

The music is meant to be played LOUD – from your turntable or blasted through your car’s speakers – with the guitars right up front alongside Tracee’s powerful voice; the tight harmonies soaring into the turns as the bass and drums keep it all anchored to the road. But the experience is even better live, where the band’s onstage energy and pro-showmanship kicks it all into high gear.

So buckle in and test-drive some Play Hot Lava today. And turn it up loud.