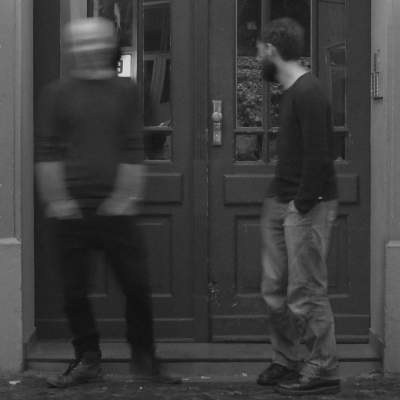 Fourteen years later, when Nick needed somewhere to stay for a month, Phil took him in in Berlin. They used the time to make the EP. ‘17’ is named after the street address at which it was produced, from a blank Cubase project to final masters in only 20 days.

Both British, living abroad, the theme of home runs through the EP. Being away from home. How the meaning of home changes over time. How sometimes what you thought was home no longer is. More than where you live, it’s where you long to go back. The people you miss.
Each track stands on its own, but is intended to work as part of a whole. Composed in such a short space of time, it was designed to hang together, around the core of ​Make Me Human​, the song at the centre. The heart of the record. It is electronic, but organic. Aside from extensive use of real sounds – opener ​Between The Houses features the sounds of domestic life emanating from the windows of the apartment block – everything ran through a cheap Behringer mixer, breathing life into soft synths with every mismatched channel, every decibel of hiss. It has soul.

Compositionally, Martin Read’s influence looms large. He taught to embrace the unexpected. To re-contextualise familiar tropes. To be bold and unafraid in straddling genres. The first homework he set was to buy ​Kind of Blue by Miles Davis. He taught the Sex Pistols next to Stockhausen, he praised the plastic pop perfection of The Pet Shop Boys.
Throughout ‘17’s production, the motto “What would Martin Read do?” was written in chalk on the kitchen cabinet. The EP is dedicated to his memory.

The ‘17’ experiment has already been repeated. ‘2’ – a 22 minute through composition – was completed in 6 days at a Berliner villa Phil was house sitting. There are plans for ‘21’, the address of Nick’s apartment in Vienna.

The name, The Non-Functional Saints, is an amalgam of Phil’s solo name – Non-Functional Harmony, under which he makes organic ambient techno – and Nick’s Brighton based blues/jazz/hip-hop band Nicolas and the Saints.

Music from The Non-Functional Saints