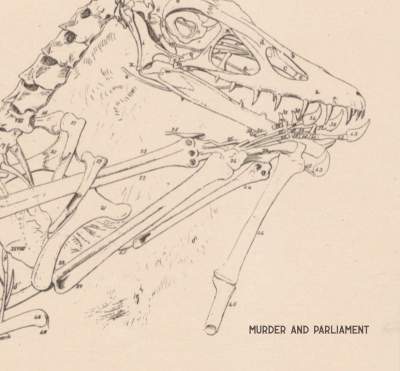 Murder and Parliament started its life about twelve years ago when composer Tom Slatter was still at college. For a final project he wrote a portfolio of compositions that were sort of classical (albeit with lots of heavy metal chords and ideas) for string quartet, solo harp and piano.

They existed just as scores and were mostly never performed. As such they felt to Tom like unfinished business, like the start of a project that never got finished.

It took about a decade for Tom to realise the missing ingredient – a load of loud drums and guitars.

Once he’d realised this was the case, Tom got to work turning what had been an attempt to write classical music inspired by metal, into an album of rocky, heavy metal instrumental music with the occasional classical hints. The result was the debut album Murder and Parliament, which will be released on Bad Elephant Music in December.

Enlisting the help of Alun Vaughan (bass guitar) and Chrissie Caulfield (violin), Tom has realised this vision of layered, complex but tuneful noise, fitting neatly into the Bad Elephant Music instrumental zone also occupied by the likes of The Fierce And The Dead, The Brackish and The Bob Lazar Story.

Tom Slatter is best known as a singer-songwriter, having released five albums of steampunk and prog-tinged rock music both independently and via Bad Elephant Music. He was nominated for a Prog Award by Prog Magazine in 2016. Murder and Parliament is his first instrumental project.

Music from Murder and Parliament