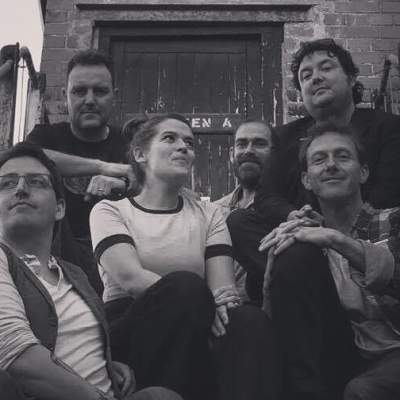 Why be 3 when you can be 6? Why try and do everything at 20? Why not live a bit first, get some tyre tracks behind you, play a bit, play everywhere and with everyone you can, do it on your terms, that sums up margot escargot, 6 people, musicians, friends from Dorset who simply like to make music and hope that you in turn enjoy the music they make.

It began in 2014 really when Steve Butler (vocals) began badgering Jamie Pinnow (electric bass) to do some songwriting, Pinnow who first had music published in 1997 was a little world weary at this point in time but was up for something new. The pair began listening to bits and bobs each other had, editing and working on new ideas and headed to a demo studio to flesh out the ideas with Pinnow playing most instruments and Butler singing. It became pretty obvious that the ideas were strong but would benefit from stronger instrumentation.

If you need drums of quality in Dorset then you need Rick Veall, a stalwart of the scene, playing everything from jigs and reels to high energy funk Rick was the man for the job of course, to marvel at the mighty Veall behind the kit is an awe inspiring thing.

Why have 1 Guitarist when you can 2? Peter Roberts is an old chum of Pinnow and the 2 had always talked about doing something.. So why not now? A strong rhythmer with a handy hand and a knack of finding a riff, the glue or perhaps the butter in the sandwich Peter had to be in the band.

The next in line for the lead Guitar position then surely had to be Tom Caulfield, Guitar slinger extraordinaire, good cock and bull and a finer drinker than many but it wasn’t to be, Tom left us suddenly and Margot’s wheels almost fell off…

Andrew Hurst had been impressing audiences far and wide with his mastery of classical Guitar often venturing into classical Guitar stylings of film scores and rock classics, also adept on all manner of traditional stringed instruments. No one rocks a cheesecloth shirt like Hurst. But could he rock? There was only one way to find out, Andrew Hurst HAD to join Margot Escargot. His orchestral rock Guitar stylings speak for themselves.

5 is an odd number, 5 didn’t fit. Why be 5 when you can be 6? Why get another gentleman when you can get a lady? and maybe one of the finest ladies in the land. Lucy Hackett is a proper musician, so proper she also is allowed to teach it. Lucy can do everything from playing Keys, Flute and Uke she can sing too and keeps the humour less blue than it had been. Lucy was going to have to join, it was the only way forwards.

Songs were written and demos were made, demos were sent off an to their surprise well received. An opportunity to see a man of music in Bermondsey London came so they went.. “You are not going to be popstars” said the man “good” said the Margots “it will be good to work with grown ups” said the man, they liked the cut of his gib.

In December 2016 Margot Escargot returned to Bermondsey and recorded some music, the rest as they say, is in the future.