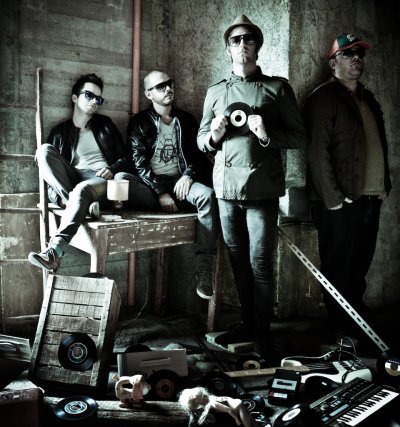 Founded in late 2010, March Division range from alternative rock to synth pop and electronic music.
They sing about love in post-atomic landscapes, wars of modern times, failures of
modern society, memories of youth, suburban hopes and dreams as a way out.

Their debut album “Radio Daydream” was released in Italy by My Place Records in January 2012, followed by the single “Let It Down”.
In September 2012 they played on the roof of the IBAT college in Dublin for Balcony TV closing their first promotional tour.
They then started recording the new album in their own studio.
In July 2013 the band played at Rock in Roma supporting Neil Young and continued as opening act in November supporting The Rainband from Manchester.
During the summer 2013 they have also produced and recorded a side-project charity album “Dynamo Friends” which was released in November supporting Dynamo Camp.
In February 2014 they released “Right On My Way” single. The video shot by Coitempichescorrono Film was released as “Video of the day” on Rolling Stone Italy and made its TV debut with the one week heavy rotation on Rock TV Italy and gained excellent reviews.
After a mini spring tour, in June 2014 they released a new EP “Metropolitan Fragments” which gained the first international reviews.
In July 2014 they played at Rock in Roma for the second time supporting Paolo Nutini and The Rainband.
In August 2014 they announced that the second album “Post Meridian Soul” is ready and that it will be released in October with Irma Records and Ocarina Management.
Brand new single “Dig It” was released on October 6th supported by the video shot by Coitempichescorrono Film.
In October 2014 they started their first Italian tour that drove them through the country for several months with more than 30 gigs.
In November they released the third single ‘Friday Will Come” which was broadcast several times on independent radio stations with many interviews as well.
While the band was on tour in February, they released Luca Urbani’s (SOERBA) remix of ‘Sell-by date’ with a self-produced video, shot during a day-off in Vasto.
After the gig in Trieste in late February, they also recorded an unplugged session for Sofar Sounds Trieste, and a video of the performance was released later in the spring.
In April they released the fourth single from ‘Post Meridian Soul’, ‘One Of Ten’, followed by a video shot during the winter leg of the tour, with footage of the band playing live and backstage.
A new album called “From The Cold Light Of This Winter”, made of outtakes and re-arranged version of songs from the first two LPs with a brand new unreleased track was released on November 30th 2015 with the video of “Downtown Devil” shot in London by the band.
They also remixed songs from italian indie bands like We Are Waves and The Doormen and M+A.
Currently working on a new album for 2016.