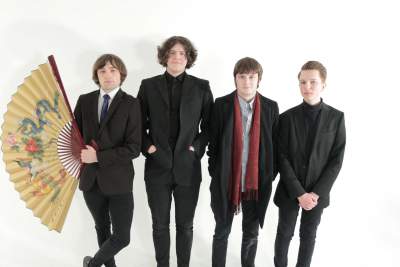 Logan’s Close are an Edinburgh 4-piece who for the past 3 years have been building a reputation for their own brand of a 60s rock ‘n’ roll sound with energy which guarantees a boogie. Following on from gigs throughout the country, on Scottish television, a sell-out show in Liverpool’s renowned Cavern Club, and now a sold out single launch at Edinburgh’s Voodoo Rooms, the band continue to hone their unique brand of old-meets-new, with emphasis on harmony and groove. Over the next few months the band are set to continue gigging between Edinburgh and Glasgow, as well as performing at the Cavern Club again in May as part of the International Pop Overthrow Festival. They are setting their sights on the UK capital as well, with a Summer performance in London on the horizon.

“They have a seemingly endless energy on stage; which is coupled with clever harmonies and really groovy tunes. It would be verd indeed, not to like what they do. Utterly infectious.” – The Write Angle, 2017
“Great name! Logan’s Close!… Logan’s Close is a great name! GREAT name!” – Janice Forsyth, BBC Radio Scotland, 2016

“They get gleefully wired into this stuff like they’ve time travelled back to the early Sixties and felt the excitement British kids had for the R’n’B and rock’n’roll sounds coming out of the States.” – Blues Enthused, 2016.