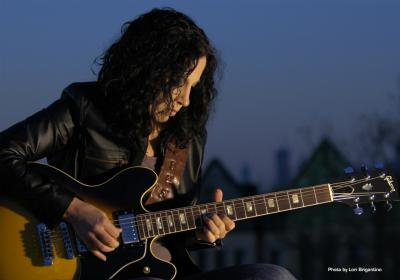 Lisa Brigantino is an award-winning Brooklyn, NY based singer/songwriter and multi-instrumentalist. She is also a trained composer with a Master of Music in music composition and theory that writes for TV, film and more.

Lisa’s latest critically-acclaimed solo CD “Wonder Wheel” is an eclectic collection of original songs ranging from Folk and Rock to Old-Time, Americana and more. Among other accolades, the album was awarded “Editor’s Pick” by Indie-Music.com and Lisa placed seventh on their “Top 25 of 2012”. Muzikreviews.com says “Brigantino has been put on all kinds of “artist to watch” lists. You should do more than watch. You should listen and then re-listen and re-listen again. Wonder Wheel will touch you, entertain you, and refresh you.“ Women of Substance Radio says “Lisa is one of the most versatile songwriters we’ve heard. She is a true artist who has mastered countless styles of writing, singing and performing. This New Yorker moves effortlessly from a sensitive acoustic ballad to an in-your-face bluesy romp without skipping a beat.” KRUU-FM says “Lisa’s voice moves fluidly from style to style, earthy on the blues and rocker songs, liquid sweet on the acoustic and pop tunes.”

Lisa released a single “Every Day’s a Journey” in October 2014, and a holiday single “It’s Christmastime” in December 2014. She is currently recording her next album with an anticipated release in 2015.

Lisa was an original member of Lez Zeppelin, the world’s first all girl Led Zeppelin tribute band and toured internationally with the band for a number of years playing bass, mandolin and keyboards. She left the band in 2009 to get back to focusing on her original music.

In addition to her own performances, Lisa also performs with her sister Lori Brigantino in “The Vickie & Nickie Show” a wacky musical-comedy act.