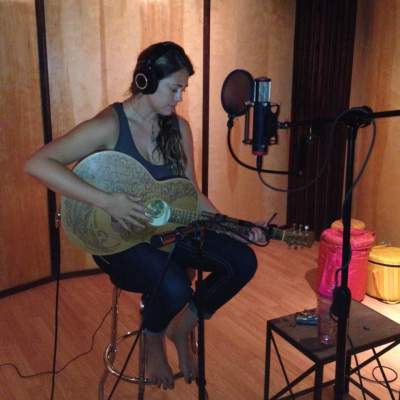 Leigh Lesho has taken the road less travelled to her musical career, but it’s left her with experiences to draw on that have shaped her talents and stylings into a unique picture of a life full of interesting moments. From being the star pitcher of the Nebraska Cornhuskers softball team, to working on reality television shows, becoming a yoga instructor and opening a studio, and eventually finding her way to the stage, Leigh has never been one to shy away from taking on new challenges and adventures, and her music reflects that bold spirit.

Working as an Assistant Casting Director for Bunim/Murray Production (MTV) on shows like The Real World, Road Rules, Making the Band, Love Cruise, and Lost in the USA; Leigh got her first taste of working in the production side of the entertainment industry. It wouldn’t be long before it became glaringly obvious that her real future was front and center of the stage and camera, rather than behind the scenes, but it helped develop the organizational skills and experiences that make a great band leader.

She has studied and practiced yoga since she was 6 years old, which undoubtedly helped develop the athletic talent that made her one of the best collegiate pitchers of her era at the University of Nebraska. She is a Nada Yogi, which means the yoga of sound is her main focus of study, and is the devoted student of Dr. K.L. Shankaranarayana Jois of Mysore, India. She also acts as the Arizona Group Leader for their official “Jivana Yoga” diploma program.

Musically, Leigh draws on the haunting melodies of the Sonoran desert where she was born and raised, with a voice that draws you into the story unfolding in your mind. Her musical style is a strong folk rock sound reminiscent of legends like Jewel with that classic sound of Arizona rock brought about by talented bands like Roger Clyne and the Peacemakers, blending into a sound that appeals to a wide range of fans of rock, country, folk, pop, and western music. The Night Lights, her band, are a collection of the best musicians that could be assembled anywhere to compliment her style.

Leigh’s first album, 444, stands as a testament to the ever evolving sounds of Arizona music, and became an instant classic the moment of its release. From the powerful and pop driven Shadowside to the inspiring I Am, this album fires on all cylinders as a musical masterpiece. The relaxing and powerful track It Could Be Easy showcases the band’s range and talent, while showing off a voice that isn’t afraid to be used, and demands to be paid attention to.

As an artist, Leigh says that she is on a mission to inspire love and joy, and give a voice to those who do not otherwise have one. She is very much a believer in the power of sound and music therapy, especially with regards to autism. She wants to one day open a ranch where this therapy, as well as yoga and equine therapy are used together to help support the journey of those with autism and their caregivers. She has experienced firsthand the symbiotic relationship between sound, body, and mind. She has helped her son, Rylan, who was nearly non-verbal until the age of four, find his voice and begin using it, often without prompting, by using these same therapies.

Most recently, Leigh Lesho & The Night Lights had the honor of opening for the legendary Jonny Lang at the Rialto Theatre in Tucson, AZ.