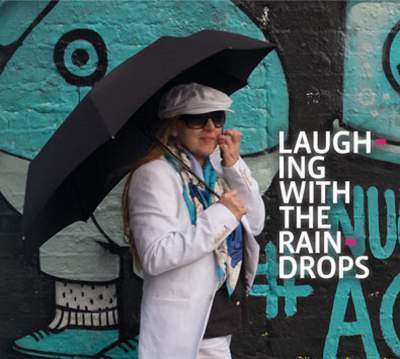 Laughing With The Raindrops

Living in Paris, songwriter Virginie Lacour-Puiboube wanted something more and followed her sound heart and mind to the streets of London. “The vibrant music scene was alluring and I had an irresistible juvenile desire to form a band in London,” is what she told Megastar Gongle on her move from one city to another.
Over the years she had been a fan of progressive rock, jammed with friends, played guitar in an all-girl Reggae band and finally found a place on the Jazz scene alongside bassist Alexander Keen and pianist Gabriel Keen. Together they formed successively Piano di Lavoro, a 13-piece band featuring a woodwind section, Baton Rouge, a vocal-led 6-piece and finally became Laughing With The Raindrops in 2013. Laughing With The Raindrops showcases Virginie’s songs at their best, featuring guest stars at gigs and on recordings.
The self-titled album LAUGHING WITH THE RAINDROPS was released in late 2016. It is primarily a physical product designed for listeners to enjoy the perennial pleasure of listening to music while perusing the liner notes and reading the lyrics on their sofa. Of course, an album is grand, but Jazz is all about the live antics which this trio is no stranger to.

Laughing With The Raindrops online

Music from Laughing With The Raindrops