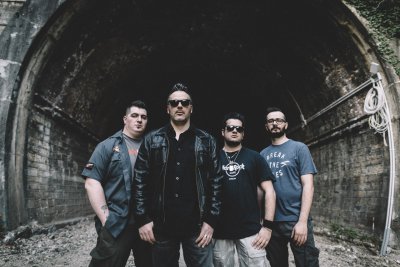 The band were born in 2006 and because of a good self-made demo, got the chance to gig a lot around the area, being soon recognized as one of the new interesting italian alternative metal realities. The band grabbed the attention of the media with the first album, “Kerosene”, recorded at the Lightless Studios (Terni – Italy), released in 2008 through New LM Records and distributed in Italy and Europe by Masterpiece Distribution. The songs are described as “a fist on the stomac”, powerful and dynamic at the same time, with melodic refrains and an amazing sound.
Just right after the release of “Kerosene”, the line-up of the band changed having Marco “Billy” Vitantoni on bass. The album was very well reviewed by the critics and appreciated by the fans, giving the band the chance to gig all around Italy. Kerosene gigs are appreciated for being a great mix of experience, fun and attention to the groove.
At the beginning of 2010 the band joined Carlo Bellotti’s Alkemist Fanatix Europe for management, promotion and booking activities. As a consequence of this collaboration the album “Face the real”, recorded at the Real Sound Studios in Parma (Italy) and mastered by Jamal Ruhe at the West West Side Studios (USA) and released on October 30 2011 through Lost Sound Records (Self distribution). On July 2012 Rodolfo “Rawdeath” Ridolfi joined the band; Rod is a very good friend and an amazing drummer, well known also because he’s in 2 other great italian metal bands, Subliminal Crusher and Hyades.
But at the end of 2014 the band went through another line-up change: Saverio “Save” Federici joined the band as new drummer; Saverio is one of the most italian talented drummers, having the chance to tour with a lot of artists among which Eric Martin from Mr Big.