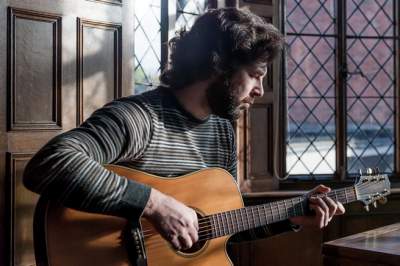 “There is a unique intimacy in the songs of KB. Yet we can all relate to them. Therein lies the magic. Music is a passion for him and when he puts voice to microphone, surrounded by fine musicians and well chosen arrangements we get songs from a wonderful singer songwriter.”
– Peter Grogan, Dublin City FM

He’s been dreaming about opening his own coffee shop someday, and thinks to himself “that’s the place I want just there” when cycling past a particular Dublin shop with a big window that goes around the corner. The place currently sells carpets.

He won first place medals in both the 1988 and 1989 sandcastle competition in the Skerries harvest festival. Sadly many have now forgotten those sunny July days as it’s almost 30 years ago.

He doesn’t own a T.V. and hasn’t lived in a house with one for five years. He is on first name terms with the waitresses in many of the better coffee places in Dublin. He reads music, but like most songwriters who write on guitar, he’s much better at playing by ear and by memory. He has many musical friends on whom he can call to take care of charting any “difficult bits” for other musicians.

He has down to a fine art the process of packing his old honda full of guitars and PA systems. Most Dublin musicians drive cars that are over ten years old and Keith is no exception. That sort of thing doesn’t bother him. By day he’s a Maths and Physics teacher. Most of his students get a little less than half of his jokes but find his classes refreshing anyway. They like when he does foreign accents and they love to watch his music videos on-line or listen on spotify and cite the words of his songs back to him in the corridors…

He grew up in the coastal town of Skerries in North County Dublin but hasn’t lived there in over ten years. As a result he remembers the place with a kind of romantic nostalgia. His song “The last 33 bus” chronicles a late night bus journey to Skerries when a sassy young woman propositions him. Most of his songs actually happened. He was very moved when a married couple wrote to him last year telling him that they met at one of his concerts.

At a concert in Pittsburgh PA recently, a girl told Keith “After an hour of your songs and stories… I know it’s weird but I feel I really know you”. He is a terrible business man, considering this type of connection with the audience a measure of success even if he made no money at a gig. An English girl once criticised him for rhyming “pants” with the word “dance” in a song. “It’s very American”, she said. He didn’t change the lyric.