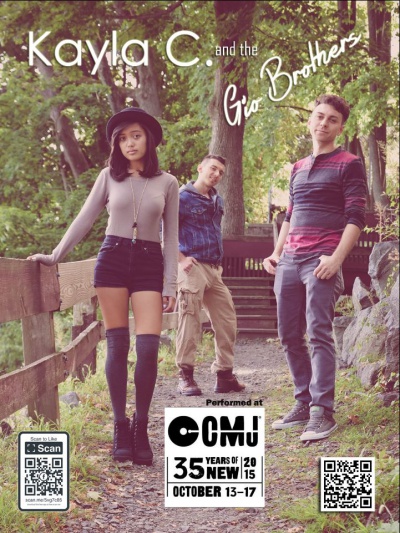 Kayla C. and The Gio Brothers

“Life is incomplete without music” a simple but profound choice of words from a 15 year old. Kayla Katelyn Cariaga known as Kayla C. fell in love with music from a very young age, inspired by family, friends, culture, and music was a natural magnet. Born and raised in Suffern, New York till the age of 6, Kayla was closely connected to the history of her parents’ upbringing and began to nurture a passion for music with the constant stimulation from a history rich in cultural festivities and art. She spent most of her adolescence in Orange County, NY with her mother and father.

A former student at Monroe-Woodbury Middle School, she was deeply involved in every aspect of their musically affiliated opportunities. This sparked an interest in her hunger to learn the intricate techniques of playing several instruments including the guitar, piano, xylophone, and drums. She absorbed every note, every chord, and every scale with ease.
With the support and encouragement of her parents, Kayla began to experiment with the art of writing and composing music. By the age of 12, she wrote her first song and about a year later she has released her very own self written and composed single, “Everything” on iTunes on the 28th of September 2013. A few months later, Kayla followed up with another single titled, “Snowflake” just in time for the holidays. This single was made available on iTunes, Amazon, Rhapsody and many other online music distributors on the 23rd of December 2013.

Kayla’s process of creating music is driven by her surroundings and feelings; she draws inspiration from her art. She enjoys using forms of art as an outlet to turn any sorrow to joy.
She often referenced her knowledge of poetry to write, throughout the years she has learned the proper techniques of song writing but continues to write from her heart. By age 12 Kayla began performing at Nursing Homes and participating in musical productions. At age 13, she started performing at charity events, various café’s, lounges and restaurants in Orange County, Rockland County, New Jersey and New York City. At the same time, she started writing new songs again.
Currently, she is a freshmen at Monroe-Woodbury High School and has already been involved in the school’s musical program and had been a part of Orange County All County Chorus. And just recently, she released her new EP titled “Memories” on the 8th of May via iTunes. This was also made available for distribution on Amazon and other participating online music stores.

This warranted Kayla additional opportunities. She has since been approached and asked to perform at private parties and gatherings, town festivals, and organizational events. Kayla is humbled with the opportunities presented to her and is greatly appreciative of having to go through this experience. This is just one step closer for her achieving her goals and reaching her dream. This journey, has brought Kayla to where she is today, filled with passion, music and colors in her soul.

Music from Kayla C. and The Gio Brothers