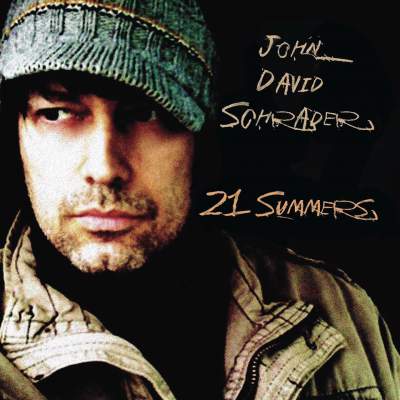 Songwriter – Composer – Multi – instrumentalist – Producer – Engineer. Whew! That’s a lotta hats for one head but John David Schrader loves wearing each one at the right time! With 3 CD releases under his belt; From Discontent, Blood In The Wood and his 2011 release Daylight Crashing, John is now working on his 4th self-produced CD! All while writing and recording instrumental scores for TV/Film and being out on the road with his slammin’ band JSB – John Schrader Band!

John was born and raised in Kingston, NY. A small city 90 minutes out of NYC by train. His love for music began at an early age when he saw Elvis Presley on TV for the very first time. “I was hooked from then on”, says John. Upon finding an old box of 45 records in his mom’s attic filled with artists like Jerry Lee Lewis, Elvis Presley, The Beatles, Chuck Berry and a ton others, it was hook, line and sinker! John started his formal musical education in the 3rd grade when he began playing the violin. The drums followed in the 4th grade. While in High School, John started teaching him self guitar and piano while still playing drums in the school band and in band’s outside of school. John had a magnetic drive toward any musical instrument he saw. He wanted to know how it sounded, how it was played, how it made the sound. John continued studying music through high school and then he majored in music in college. He got himself involved in every musical ensemble he could find – jazz, classical, wind, percussion…you name it, he was in it! John played the drums, vibes, piano, guitar, sax…whatever was needed. He just wanted to learn!

John also earned a degree in media production w/ a concentration in Film/Audio/Video production/post-production and has worked in NYC for years in film/audio production. He now owns his own recording studio (JLS Sound) and his own production company (Bugbird Productions) where he scores instrumental music for film/tv.

John is an active, award winning member of ASCAP and owns his own publishing company – Mahmnic Music Publishing. John is also an active member of SoundExchange and NARAS (The Recording Academy).

John’s song writing began in strength when at 21 he was diagnosed with aggressive testicular cancer and was given time frame of 5 years after the surgery as a guage for his survival rate. This was the same cancer that Lance Armstrong had battled. John says, “everything I was going through and had gone through growing up needed a voice”. John’s music reflects the wounds from battling and the pains of losing from a young age – the long climb up from what some call a dead end town – a constant struggle to “tell his story.” The loss of his father at age 9 to cancer was to be the rocky start that would shape John’s views on life. John also lost his beloved Mother Lorraine to Leukemia. “She was my hero…she was my best friend..she got me through my bout with cancer…It’s not possible to put into words what she meant to me”, says John. And that’s just what he writes about – his loss – his life – his wins. His song’s are his ‘slice-of-life.’ Their themes of pain, struggle, anger and yearning to “get out” yet still embracing with pride, the streets and places that shaped him are palpable.

John is now featured on a benefit CD of cancer survivors through the organization I2Y. I2Y Founder Matthew Zachary says of John, “It’s pretty common knowledge that music is a universal language that transcends time, race, religion and pretty much everything else. What isn’t common is how often a musician comes along with the purest of creative instinct, the deftness of a fine craftsman, the passion of love’s greatest gift and the soul-churning anguish of life-altering medical experience and harmonizes those collective influences into something truly original. It has been my distinct and humble pleasure and honor to not just be a fan of John Schrader but a personal friend as well.”

As of July 1st, John’s new CD 21 Summers has officially been submitted to The Recording Academy for Grammy consideration for the 59th Annual Grammy Awards in the following categories: