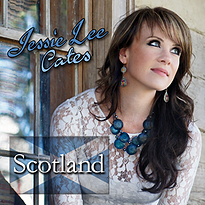 From the factory floor to the stage door, Nashville recording artist Jessie Lee Cates has worked her way into the hearts of Country music listeners around the globe. The East Tennessee singer/songwriter, who recently scored her first international #1 with the hit single, “Behind Your Back,” (Ramgatie Top-40), was born and raised in the hill country of Hamblen County, where she was determined to use her God-given vocal talents to enrich others’ lives with her music. JLC took second place at Kelly Pickler’s Kellioke Contest in Knoxville, and sang her songs at well-known Tennessee festivals such as the Foothills Fall Festival, where she opened for Jason Aldean, and at the East Tennessee Farm Relief concert, sharing the stage with Aaron Tippin.
While performing in a local pub, she was discovered by Knoxville radio personality Mike Hammond, and was soon playing at some of Nashville’s best-known venues, including Tootsie’s and Puckett’s. A pending deal with Equity Records fell through when the label collapsed, but Jessie Lee was undaunted, refining her songwriting and singing skills as she worked the 12-hour night shift on a factory assembly line, churning out power steering pumps.

Returning to Nashville in 2012, Jessie Lee brought her modern-classic-country-with-a-twist style to new fans and new venues, and in November 2013 released her debut album, Let Your Country Out, on her own Wayward Rose Records label. The CD yielded back-to-back Top-5 hits in Europe: “Scotland,” the only modern Country song to feature the bagpipes, and “Let Your Country Out,” aired as the opening song of the Country Legends in the Making radio program and broadcast to over two million listeners worldwide. Along with the aforementioned “Behind Your Back,” JLC songs have generated spins at over 2,500 radio stations in 32 countries worldwide, and her “Scotland Official Music Video,” shown on the Phil Mack International Country Show, was watched by millions of viewers in Ireland, the UK, the USA and abroad.