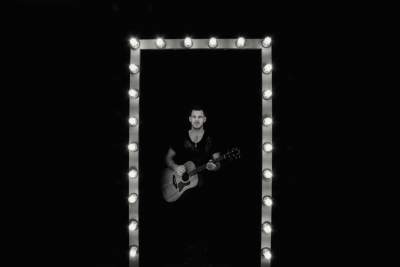 Jamie is an accomplished singer/songwriter who is never more comfortable than when he is behind a microphone with a guitar in hand. At age 12 he gained a keen interest in playing the drums, and then picked up the guitar for the first time when he was 16. His musicianship really started to take shape from this point, especially when he joined a couple of local bands. He soon learned his trade both as a drummer and as a singer in various situations, including gigs in mainland Europe, on live television, and crowds of 2000+.

As well as performing in bands, Jamie was a regular busker on Newcastle High Street from 2007 to 2009. Although he was exclusively singing covers, he would regularly draw crowds who would stop and listen to him sing, ask for business cards, and want to know more about him. As well as getting him used to performing on his own, this time performing in all weather conditions for hours on end strengthened Jamie’s vocal abilities and guitar playing to a standard becoming of any respectable solo artist.

It was while Jamie was involved in the bands that he began honing his skills, and understanding the process behind songwriting. His style evolved from numerous influences and has become a conversational storytelling style of songwriting. His songs are true to life for the everyman of today encompassing everyday themes, thoughts and feelings.
“Buckle Up” was written out of the realisation that life happens and it can unfortunately take your focus away from your partner, but setting aside that important “us time” can bring you back to the exciting flirtatious couple you were before responsibilities overtook pleasure in your list of priorities.

Jamie’s EP is called “Better EP”. It expands on the premise that was started with Buckle Up, and discusses every day feelings, thoughts, emotions and situations in a fresh and honest light. Tracks include the honest and reflective “Swan Song” as well as the autobiographical description of a night he’ll never forget in “Kitchen Party”.

Keep a watch out for more from Jamie in the future as he assures you; he’s here to stay.