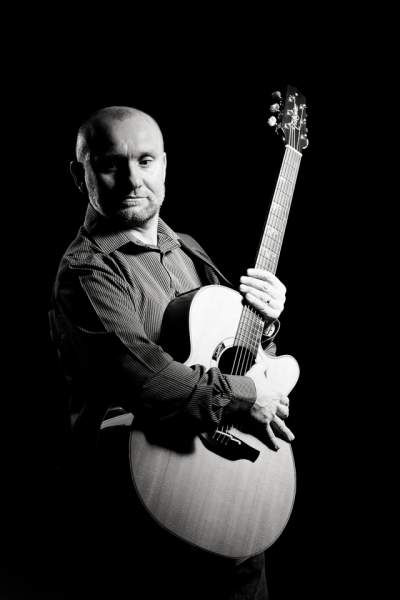 Gary Anderson is a well known singer/songwriter from Montrose on the North East coast of Scotland. He has played with various bands around the area and has gained a wealth of experience covering a wide range of instruments and genres. His solo performances showcase his eclectic style of playing and singing – mixing his own original material which covers a wide range of subjects and inspirations, with a few folk, rock and country covers, all stripped down to great effect using only his voice and a guitar. He also currently supplies vocals and guitar with Rock band F’n’3Gs, and performs in a duo with his sister under the name Kith & Kin.

His second CD Hair o’ the Dog is available via iTunes and Amazon as well as in person at gigs. Songs from it are also getting plays on radio stations both in the UK and Overseas.

“Hey Gary your cd is accompanying me ‘n John all the way home… Snowdrops melts me heart boy! ” Eddi Reader

“Gary’s songs, voice, guitar playing and stage presence all convinced Cathryn Craig and myself, that we were watching a great artist at work.” Brian Willoughby (Ex Strawbs)

“Gary Anderson is the consummate all round performer. His version of the James Keeleghan classic, “Cold Missouri Waters” is even better than the original by Keeleghan himself. Gary is also developing rapidly as a Songwriter; his song based on the Neil M Gunn Novel, “Butchers Broom” not only faithfully reflects the spirit of the original work, but transforms it into a very fine song.”
Ken Bruce, Montrose Folk Club

“Gary played a blinder – a bunch of engaging songs from his own pen, complemented here and there by a tasty cover.”
Paddy Bort, Edinburgh and Wee Folk Clubs

“To fully engage an audience from a live platform, the 21st century troubadour requires; great melodies, great lyrics, great stories and above all that often indefinable yet undeniably powerful quality ………. charisma! Gary Anderson has all four, in spades” Gordon Richardson Caffe Borsa, Dundee

“Hair o the dog is a lovely collection of self penned songs by Gary Anderson, a wonderful singer songwriter from Montrose. The 9 track album is totally stripped back and very well produced by Gary in a room in his own home studio in Montrose. He could have added a load of instruments and frills but they are not needed it is Gary’s voice that comes across in a lovely Scottish accent and its the lyrics and melodies that draw the listener in. I love artists like Gary who are true to themselves and their music. These songs are heartfelt and well crafted by a very unassuming writer and singer . My favourites are Snowdrops a beautiful tribute to his late mother and The title track Hair o The Dog. Dundee has recently lost a great artist “Michael Marra” Montrose has gained Gary Anderson and his work should be applauded . I cant wait for the next album”
Mary K Burke (Celtic Music Radio, Glasgow)

“Gary’s uniquely creative sounds are always a crowd puller for us at Mo Fest and its great to have this extremely talented artist a part of our events each year. His Hair O the dog album is a beautiful collection of self written songs and is a must buy for any music fan” David Paton (Chairman, Montrose Music Festival Committee)