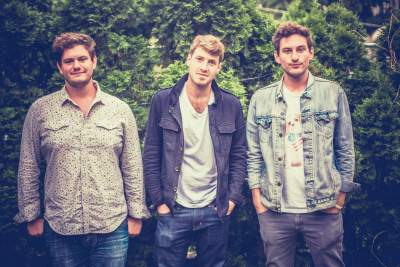 The band ventured from their homes in New York soon after graduating college, to a cabin in the Blue Ridge Mountains of North Carolina, to begin writing and recording music together. During their six week reprieve in the woods, the trio would go on long hikes through the mountains to soak up inspiration for their music. While exploring, they would follow the fox tracks in the snow, which led them to new undiscovered parts of the woods. The band soon realized that they were following their own personal “Foxtrax” by having the courage to become artists. This message struck a chord with their family and friends, giving rise to the phrase, “Follow Your Foxtrax,” which aims to encourage others to follow their passions. The music created while at the cabin would eventually become “The Cabin” EP.

After returning home, Foxtrax began headlining notable New York City venues like Mercury Lounge, Rockwood Music Hall, Pianos and more. The combined success of the EP release and a growing local reputation led to the band’s successive selections for 2015’s CMJ Music Marathon and The Deli Magazine’s Artist of The Month. Moving to Los Angeles to begin work on a new record, Foxtrax have since joined the ranks of SiriusXM’s “The Spectrum” with airplay of “The Cabin” EP by DJ Mark Goodman. Already balancing headlining gigs and two residencies alongside development of a music video, single release, and an upcoming U.S. tour – all in the works for 2016 – and it’s undeniable that Foxtrax is just getting warmed up.