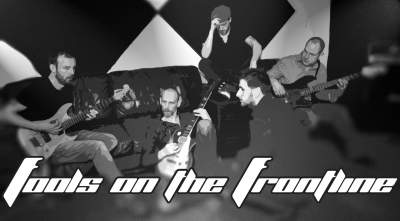 Fools on the Frontline

Two brothers, chance encounters and a shared vision are responsible for the origins of this band. Family, mutual friends, second hand car sales, collaboration and simple chance all played a major part in the creation of this band. In December 2015, these five fools agreed to meet in the same recording booth at FML studios to record their debut track, ‘I Am One’. At this stage these guys were still meeting for the first time. A guide demo passed around days earlier became a living realisation that this band had stumbled onto something bigger and better than any of them could create individually. This had to continue. Each playing style as individual as the players themselves, these fools create a current, razor sharp, biting narrative of contemporary living and make no apologies for doing so. Join us! The Many Lost! We are Fools on the Frontline…and so are you.

Fools on the Frontline online

Music from Fools on the Frontline