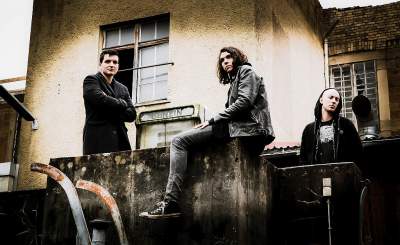 Certainly no strangers is the Flowers in Syrup captivating music to us here at FORKSTER Music Promotions. It was an exceptional honour in covering them back in the November/December months of 2015, with a promo spot we did for them on their significant debut EP entitled “Getting Closer”. We have always felt since then that they were a very important music statement and they really had a good shot at becoming an extremely significant band on the independent rock circuit for years to come. Well, they are certainly going to make us look even more admirable at picking  bands on the music rise globally now. Their amazing new music is almost upon us and they could potentially have a music accomplishment in becoming a household name in the global ear rock module communities, it’s that smashing good.

Flowers in Syrup releases their 2nd studio EP “SkyDivers” digitally everywhere on the 23rd of June 2017, as well as you will be able to purchase it worldwide as a physical CD on the 30th of June 2017.

One characteristic that we felt all along that separated Flowers in Syrup from most of the pack was a music maturity fullness. When we recently were notified from their management that they would be purchasing our services again for helping in promoting their latest music we were thrilled, but even with being personal fans of their music honestly I don’t think we saw this coming and ‘wow’ is FORKSTER himself personally thrilled to bits in providing you all the rocking goods on this massive EP’s flair.

“SkyDivers” is a music masterpiece. The EP superbly gleams out an all- powerful rock grandeur with an exceptionally gifted experimental swirling madness. A lot to do with creating this gem was how the trio from Stuttgart, Germany, Costantino Campello Squeo (vocalist/guitarist), Nico Mania (drummer) and Tobias Sippel (bassist), let us all worry about what we categorized it as and they magnificently went on to make a record that kept to their standard alternative rock platform, but for the more diverse alt-rock fans you’ll hear and absolutely ‘rock out’ for their post-rock brightness, hard rock crunch and their atmospheric noise rock charm.

This undeniably gifted music EP has taken their musicianship maturity and overall song structures to the comparisons now of atmospheric rock goliaths such as U2 and Radiohead. They have that desire and extra kick in the music tank to push the experimentation bar, but at the same time establish entire efforts where every song on it is worthy and wanted for their own listening purposes from playing out universally on radio stations to music appreciators everywhere who want them now in their constant/daily music playlists, gargantuan music release!

Music from Flowers in Syrup