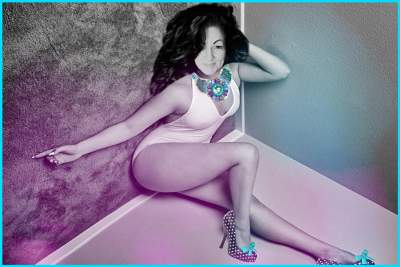 Jacqueline Williams known professionally as FancyJ London is an American Singer and Songwriter raised in Boston, MA. spending most of her summer’s on Cape Cod near the Kennedy Compound in a small town named Chatham located on the elbow of the Cape. Her summer’s were something she couldn’t wait for, she loved being near the beach and sneaking off to a small marsh behind her grandmother’s house to write lyrics and stories in her journal or draw while listening to Whitney Houston her walkman.

In school she enjoyed playing piano, and the flute, but was more interested in drama and plays. She began her acting in fourth grade at Emerson Elementary School in Malden MA. Taking the star role as “Oliver” in the play “Oliver Twist” from the Author Charles Dickens. Where she sang the popularly well known song “Where Is Love.”

FancyJ London learned quite a few skills due to not knowing what direction she wanted to lean towards. She spent 11 years after high school learning everything possible hoping to find her occupational dream. She ended up taking courses, going to college, and university dabbling in everything from business, communications, criminal justice, language arts, photography, music, drama/acting, dance, journalism, teaching, cosmetology, phlebotomy, nursing, fashion design, sewing, culinary arts, psychology, wood shop and carpentry.

One day out of the blue, she was approached by the owner of an independently owned recording studio who was impressed when she sang karaoke in a club, he asked her to sing back up for an artist’s tracks in the studio. She agreed and later was asked to start singing as a solo artist. She started singing in church choirs, talent shows, clubs, karaoke bars, restaurants, private events, parties, functions and festivals.

FancyJ London has quite an impressive vocal skill when it comes to belting out those tones. Her Vocal Type: Alto/Lyric Soprano
Vocal Range: 5 octaves 2 notes and a semi-tone.
E2-G#7 Whistle register:
Her impressive “whistle voice box” reaches insanely high, amazingly long notes.
Her Longest Note to date is 24.41 seconds in her Creative Cover Back Off (Headstrong by: TRAPT) Her voice has been compared to Lady Gaga, JoJo, Jennifer Lopez, and Kelly Clarkson.

FancyJ London has enjoyed singing from the time she was in her crib bobbing her head to her Father’s records of John Williams Star Wars Sound Track & Danny Davis and the Nashville Brass, to her preteen years listening to her Mother’s favorites like The Beegees, Carpenters, & ABBA. FancyJ’s personal favorites were Alanis Morissette, Joan Osbourn, Whitney Houston, Mariah Carey, Lisa Loeb, Ace of Base, TLC, New Kids On The Block, Celion, Dion, Michael Jackson, Guns&Roses, AC/DC, Aretha Franklin, & Madonna.

Where is FancyJ London today? Well she is on tour in Mexico and South America where she has generated quite a large fan base. Her albums R3D, Whit3 & Blu3 can be found on Apple Music, Spotify, Google Play, Amazonmp3, Rhapsody, eMusic, Youtube, Bandcamp, & more. Visit her website for the latest updates, contests, concerts, and music. www.fancyjlondon.com