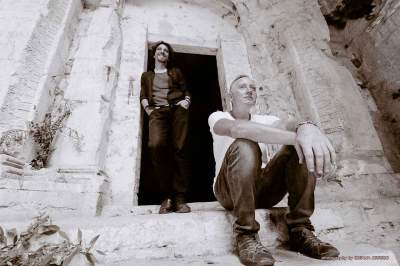 Massimo worked like a tour musician with the italian artist “Lucio Dalla”, “Biagio Antonacci”, the band “Stadio” and also like producer , songwriter ,musician and arranger for the italian pop star MINA.

Fabrizio was a former member of the successful Italian cult hard rockers Revenge since 1982 to 1987, when the band split up and he joined Brando, a band from Milan whose line-up also included Fabrizio “V.zee” Grossi (now a reknown producer based on Los Angeles) with whom he toured internationally.

Through their connection to producer Fabrizio “V.zee” Grossi they became the chance to write songs for solo projects of Danny Vaughn (Tyketto) and Joseph Williams (Ex-Toto).

Based on the success of their works written for other artists and the great chemistry between them, the duo decided to record their albums. “Music From The Fab Box – Avenue of Allies 2009” and “2 – Art Media Music – 2015/16” are the impressive showcase, featuring songs in the best tradition of classic Westcoast AOR and Melodic Rock with a healthy dose of Pop.