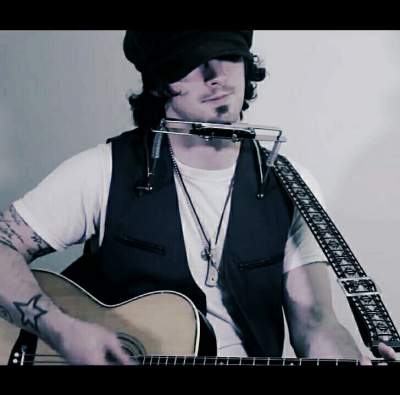 David Ryan is going places. From New England to Nashville; from Metal to Americana; from drummer to singer-songwriter—one thing is clear: this man is on a journey. His starting point on the map is the Boston suburbs, where he joined the school band at a young age. As a member of the drumline until graduation, David cultivated a solid respect and understanding of music.

Of course, that next stop on the map was a stint with some of the rock and metal bands in the Boston area. This stop in the journey led him to work with famed Rock icon Andy Pratt, who wrote and recorded some of the most beloved songs in the world. After drumming with Pratt, David’s journey crossed paths with Colene Walters, Porter Waggoner’s duet partner after Dolly
Parton went solo. Walters, a Grand Ole Opry legend, needed and drummer, and David Ryan fit the bill. David set his sights on Nashville. It was time to start moving on. It was here in Nashville that David began writing with Big Tent Publishing Artists and realized his dream to become a singer-songwriter. While playing gigs for others, he also wrote and recorded his own catalog of songs, now known as David Ryan, The EP.

In the tradition of great Americana music, Ryan plucks nostalgic heartstrings with every track, starting with My Love and completing the journey with Getting a Move On. Reminiscent of famed poets and artists Bob Dylan and Neil Young, the David Ryan EP focuses on positive changes in the world, a departure from Americana’s more forlorn Country cousin. He combined
his love for Americana music with his roots in Rock and Metal, and the result is an Alternative EP that’s sure to please listeners of all genres. Though this is David Ryan’s debut solo EP, he brings to the table and extensive and impressive musical resume. The David Ryan EP was recorded and produced by Tim Rogers, who also mixed
and provided instrumentation on the record at Wild Wind Recording Studio. This isn’t the end of David’s journey. He’ll keep traveling, first in support of his EP all over the
country, and then on to develop and record more music. This is only the beginning.