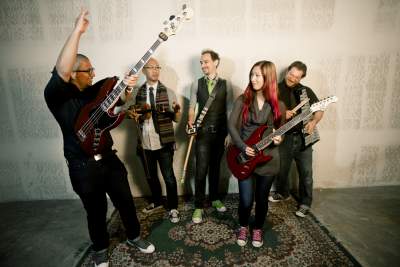 Started in 2008 by singer/songwriter Mike Shirley Donnelly, Curious Quail began as a one-man DIY project mixing chiptune music made with an Atari 800 and a Nintendo Gameboy, guitar driven rock and orchestral arrangements. Influenced heavily by the fuzzy alternative guitar sound of the 90’s, and both retro and modern video game soundtracks, 2009’s The GLOW Ep painted a picture of one man, his guitar and his technology.

Morphing into a 5-piece band over the course of the second release (2012’s .:INSTANT GRATIFICATION:.) incorporating violin, female harmony vocals and orchestral percussion, Curious Quail’s music has been described as a mix of The Smashing Pumpkins, The Postal Service and Modest Mouse. They have performed at LIVE 105’s BFD, C2SV, Left Coast Live, subZERO Festival, 8BitLA’s FREQUENCY and MAGFest’s ROCKAGE alongside bands such as Of Monsters and Men, Silversun Pickups, 30 Seconds to Mars, The Protomen, The Thermals, OK Go, Neon Trees, Night Riots and Finish Ticket, as well as chiptune acts Slime Girls and MegaRan.

2014’s AFTER THE LIGHTS FAILED (Produced by Jon Devoto of The Matches) was funded via a massively successful KickStarter campaign. The response was overwhelmingly positive with it reaching NanoBot Rock’s #2 spot in their “Top 10 Albums of 2014”. Quail’s music has received radio airplay on LIVE105, KSJS, KZSC, KFSR, WUPI and has been profiled by NPR Music, CMJ, The Bay Bridged and more.

In 2015 Quail toured the west coast with stops all over California and the Pacific Northwest including a second appearance at LIVE105’s BFD and a headlining slot at San Francisco’s legendary Great American Music Hall. Their most recent single, “Rallying Cry” is but a taste of what is to come on their upcoming release “Empty Victories” which will land in 2016.