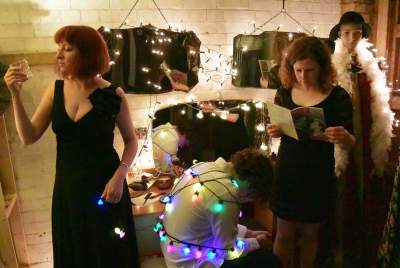 Bugeye reformed last year after a series of events drew them back together. The result of these cosmic events, was an EP that not only hints at what could have been, but clears the path for the talented three-piece to fulfil their undoubted potential. Bugeye draws parallels with a number of the defining indie rock bands of the late 90’s/early noughties such as Sleater-Kinney, Le Tigre and Gossip as they pursue, with a great deal of success, the ultimate rock and roll sound. Blending cherry-liqueur lyrics, bubblegum-kneecap bass electrics, goth-heavy drum compactions and high-rise guitar sculptures, Bugeye have created a beautifully, unapologetic riot grrrl-inspired vibe that is both notable for it’s contemporary sound as much as it is for it’s throwback qualities. Quirky, dramatic, offbeat and intensely groovy, their sound wouldn’t be out of place blaring from the Twede’s Cafe jukebox, accompanied of course by a slice of cherry pie and a “Damn fin cup ‘o coffee!”.