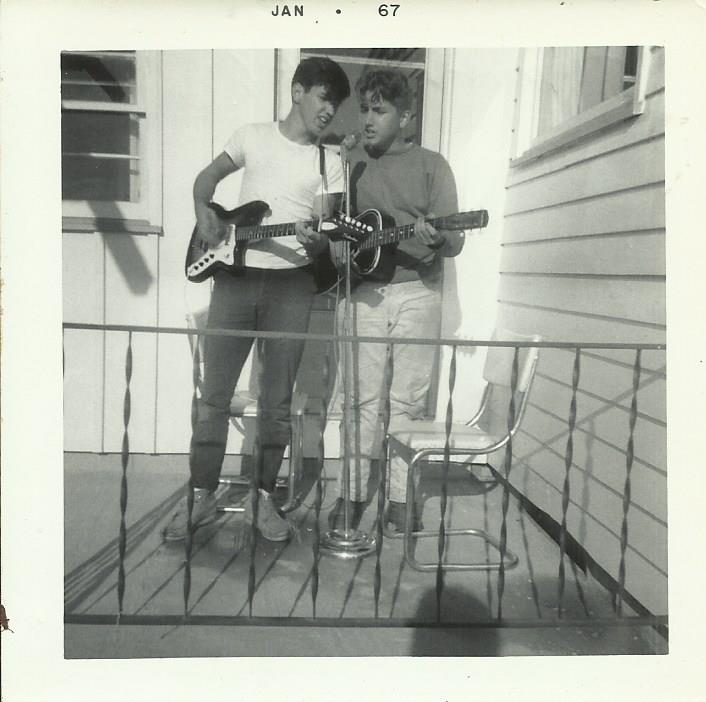 I started playing guitar when I was five when my uncle, Glen Powell who was crippled from polio as a child, began to teach me. I spent endless hours sitting under the oak tree in his front yard playing guitar. I started writing songs when I was about twelve and I remember from the time I was 12 until about 17, that all we did was play music. When I was 17 or 18, I was playing music with my life long buddy Jay Moore and we played everywhere we could. We even opened for George Jones and Tammy Wynette in Aliquippa Pennsylvania in the late 60s. I was the base fiddle player for the band and Jay was the lead singer and played flat top rhythm guitar. Anytime we went anywhere we had our guitars with us and ended up playing. We played private parties, around bonfires in folk’s back yards and even at a rest stop in Fly, Ohio. I began playing lead guitar when I was 19 with my uncle in a country band that played in clubs in West Virginia. My musical career was interrupted by the Vietnam War and I volunteered for service in 1970. After I returned home from my service in the U.S. Army I jumped right back into playing music. I played country music for a while in a band, then southern rock for a few years in another band, in nightclubs in Ohio, West Virginia, and Pennsylvania. Then the 80s hit and family priorities and finances caused me to put my music on the back burner. In the 90s I got divorced and really started writing songs. Friends, family and people I ran into kept pushing me to do an album. I’ve played and written country and rock and roll music but my biggest interest has truly been writing songs. I either write about situations in my life or circumstances in the world around me. I’ve always wanted the opportunity to get my music out in the world for people to get the chance to hear it. Currently I’ve written over 200 songs. In May of 2014 I won the Northwest Alabama 2014 Songwriter of the Year. My original song “Wildcat Blues” won 2014 Best Blues Song and “Same Old Story” won 2014 Best Religious/Gospel Song from The Ohio Music Awards. Most recently won Northwest Alabama 2015 Album of the year for “Buddy Powell” as well as 2015 Best Gospel song for “Jesus is my Friend” and 2015 Best Religious song for “How Low the Thunder Rolls.

Additional message:
Most recently, Buddy Powell won album of the year in the 2015 Northwest Alabama Songwriter’s Contest for 10 new songs. Two of these songs won individually. “Jesus is my Friend” won Best Religious Song and “How Low the Thunder Rolls” won Best Gospel Song. Buddy will be returning to Alabama in September to work on full production of these and a few more songs with Lampco Records.
Artist, Buddy Powell won two categories in the 2014 Ohio Music Awards. Buddy Powell’s original song “Wildcat Blues” won “Best Blues Song” and his original “Same Old Story” won “Best Religious/Gospel Song”. Buddy’s picture and some of his music will soon be available for streaming on the OMA website www.theohiomusicawards.com .
Buddy also received the “2014 Songwriter of the Year Award” in the Kim’s World of Talent Songwriters Showcase VIP Jamboree in Lexington, Alabama on May 31. The award included a $3,000 recording and record release package for the Northwest Alabama Music Publishing Company, owned by Kim and Darrel Glover. As part of this project the ten year Grand Ole Opry performer Ray Wix added his guitar talent to Buddy’s songs on the album “Buddy Powell” Contributor to the movie Muscle Shoals, Lindon “Spooner” Oldham, also known as an original “Swamper” and inducted the Rock N’ Roll and Country Music halls of fame graced this album with his unique piano sound.
Buddy Powell’s music will also be featured in the upcoming film San Antonio Undead by local screenwriter Renee S. Ebert.
Buddy Powell is a lifelong resident of Lisbon, Ohio, and has been playing guitar and writing songs since he was 8 years old, when his uncle Glenn taught him how to play. Buddy has released 5 albums, “No More Fences”, “Train Going Nowhere”, “Another Run of Bad Luck”, and “Cold Night Campfire”, along with “Buddy Powell” produced by the Northwest Alabama Music Publishing Company and released worldwide by Lampco Records.
Buddy Powell’s music is available on iTunes, Spotify, ReverbNation, Amazingtunes.com, Amazon.com, Google, Gracenote, Xbox Music, and YouTube Audio ID.
His Facebook page is www.facebook.com/thebudpowell and his Electronic Press Kit is available at http://www.reverbnation.com/rpk/budpowell.

Feel free to contact the artist for additional information through email at budpowell@ymail.com