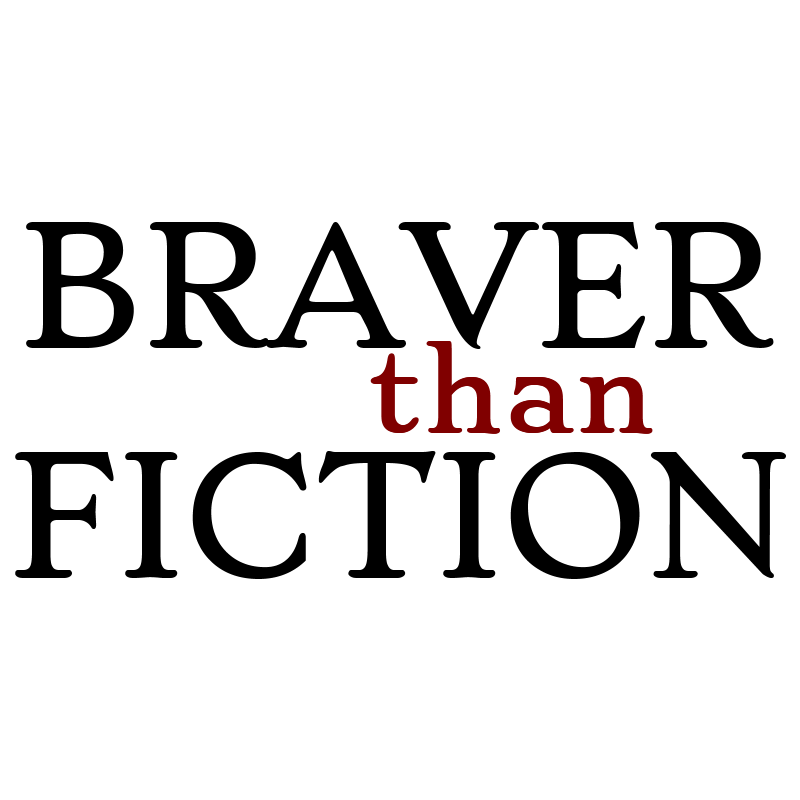 Hailing from Sheffield but not entirely comprised of “dee-dars” (yes, a couple of them there southerners got in there somehow) Braver than Fiction are a bit of a mixed bag – but with really, really strong calf muscles.

Sheffield is famously built on seven hills and all of the band members have legendarily trudged up/fallen down every single one of them. Also, all of Braver than Fiction’s rehearsal and studio spaces are cruelly but co-incidentally situated at the top of endless staircases; as a result, all of the band have, at different intervals, wished they’d taken up the kazoo.

So who is this sturdy-legged bunch of troubadours from the damp, industrial north of England?

Braver than Fiction formed as a studio (that really means living room) project in the summer of 2013 and quickly recorded their debut track, “Your Little Fantasy” which they duly uploaded to t’interwebs and wandered off to have a pie.

When the track started receiving a great deal of interest online and following it’s sensationally well-received Hallowe’en showcase (as well as numerous noise nuisance complaints from local residents) the decision was made, in the autumn of 2013, to take the project out of the studio (living room) and into live venues – God help them.

There are usually five of them, sometimes four and there have never yet been as many as six – except for that time there was a brief appearance by the mythical ‘Dancing Viking’, who has become part of the Braver than Fiction lore (but sadly, not the band).

Indeed, several members have already come and gone during this fledgling band’s early career and, they went through their veritable overabundance of drummers like nobody’s business, until they acquired the bobble-hatted behemoth that is Paul. Possibly the drollest member of Braver than Fiction, no situation escapes Paul’s irreverent comicality – yet, he has that fabled ‘heart of gold’ as well. Combine that with his rock-solid drumming and there you have the unmistakable pulse that drives Braver than Fiction’s sought-after live sound.

Until Paul’s arrival, Adam had enjoyed the lofty position of ‘tallest band member’ which actually meant that he was the one who’s oxygen levels usually returned to normal the fastest after hiking his bass and amp’ up eight flights of steps to Braver than Fiction’s rehearsal room. To be fair, he could take on more than one step at a time though. Maybe it’s because he’s so tall and his bass is so far away from his face that has made Adam so dexterously brilliant a musician (honestly, he’s got music degrees and everything); it’s a long way down to check what your fingers are doing so it’s best to make sure you are really, really good – then you don’t have to try and keep looking at your hands.

What is more, Adam’s just as good on guitar as well as bass. So is Paul and…guess what? So is Braver than Fiction’s keyboard player, Jason (who is also of an adequately, manly physique and thus, does not have to struggle to change a light bulb). In fact, all of the band can play more than one instrument with varying degrees of skill but nevertheless, competently enough. It’s not a circus though (well, not all of the time) and most of the band stick with playing just one instrument at a time – even the multi-talented Jason, the ‘Rick Wakeman of Barnsley’ (he works in Barnsley – it’s a long story) and who is not only not from Sheffield but is from deep, down in the mysterious south-west of England.

Nevertheless, the band still needs a guitarist and that’s where Martin, the newest victim arrival to Braver than Fiction’s line-up, comes in! Having recently satisfied the band’s ‘unofficial’ multi-instrumentalist and height criteria, Martin (who is also a professional measurer-upper) quickly fitted in with the rest of the Braver than Fiction members, augmenting their sound with both his electric and acoustic guitar savoir-faire. He’s another interloper though – Sheffield-based now, Martin has spent a good deal of his life in Hull but has not absorbed the accent and annunciates his H’s perfectly.

Now, if you are wondering at all what this obsession with height is, it may have something to do with Mel. At five feet, three (and a quarter) inches tall, she is definitely the shortest member of the band so naturally, to compensate, she’s also the loudest. Although based in Sheffield, Mel is originally from Cornwall and the second of the now-outed southern infiltrators in Braver than Fiction. Since arriving in the Steel City, Mel has been known to materialise at the occasional jam session and/or open mic’ night with her trusty, custom acoustic guitar. She has never tried the dangerous Japanese art of karaoke and does not air guitar; not even when she is home alone, tuned in to Planet Rock (although she does know how to ‘talk Metallic-ah!’)

As the principal songwriter and lead vocalist with the band, Mel’s passionate and sometimes downright disconcerting lyrics coupled with her distinctive, husky delivery are unquestionably a significant component of Braver than Fiction’s instantly recognisable sound. Even though she is a classically-trained musician, as Mel is dyslexic, dyscalculic and synesthetic she favours a more abstract approach to her craft. She can often be found waving her arms around, illustrating musical concepts in terms of kaleidoscopic, cross-sensory metaphors to the rest of Braver than Fiction; they deal with it.

So as different as they all are, this mad mix should probably not work but nevertheless, does work and it is obviously working bloody well. Braver than Fiction’s swift inclusion onto the playlists of radio and venue DJs worldwide, strong social media following and clear love of live music have given them a great start and 2014 is looking to be a phenomenal year for this outstanding band. The unholy fusion of Braver than Fiction’s members’ diverse industry backgrounds, individual creative influences and musical styles is undoubtedly the fuel that fires their unique sound and has everybody who hears them talking! Together, they enjoy a wealth of experience and Mel’s collection of hats has been known to cause a stir, as well.

However, the way that this collective works on any of their compositions, each according to their singular flair but simultaneously in synch, reveals a fascinatingly organic process. Comparisons have been drawn with the grotesque glamour of Tom Waits and the dysfunctional ‘family’ of Fleetwood Mac’s Rumours incarnation but, Braver than Fiction are still evolving. Although ‘alternative rock’ seems to be the closest genre fit, this extraordinary band continues to resist being pressed into any kind of predictable musical mould – for now…

Music from Braver Than Fiction