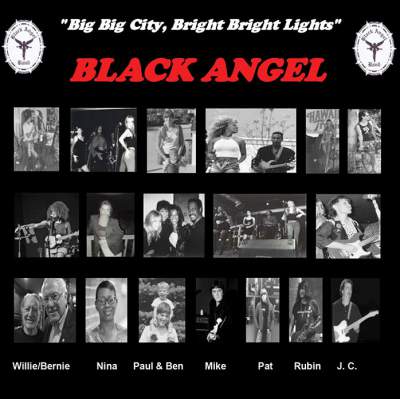 HISTORY Black Angel originated in Santa Barbara and Los Angeles in 1999 with J. C. Martin leading the band and with Audrey Madison Turner (lead singer of Ike Turner and The Kings of Rhythm and also Mrs. Ike Turner) as a vocalist and Ronnie Turner (only son of both Tina and Ike Turner)
on bass. The band was originally called The Prophets and played in major Los Angeles and Santa Barbara clubs such as The Roxy, Jack’s Sugar Shack, Luna Park and the Wildcat Lounge. The Prophets released one CD, “The Prophets EP”, in 1999. Since then the band has released eight full-length albums, “13 Stories” (2001); “Real Music for Real People” (2003); “O’ California” and “O’ Santa Barbara” (2007); “O’ San Francisco” (2009); “O’ Los Angeles” (2014); “Pleasuredome” (2014) and “Hard Livin’, Hard Times (2015). Black Angel has played shows at such Southern California clubs as B. B. King’s Blues Club, The Coach House (San Juan Capistrano), Paladino’s, Rusty’s Surf Ranch, The Cat Club, The Creekside Inn, the Martini Lounge, The Tryst, SRI (Studio Instrument Rentals) Showcase, The Musicians Institute, The Scientology Celebrity Center, The Gig and The Joint. In San Francisco we have played in front of 20,000 people at both the Off The Grid Fleet Week show for the Blue Angels (2013) and at the Oakland First Friday celebration event (2015. We played in front of over 10,000 people at the Oakland Marathon in 2015.

CURRENT BAND LINE-UP Since relocating to San Francisco in 2012 Black Angel has added lead guitar player, Rubin Ray of Marin; bass player, Mike Stever of Berkeley, and drummer, Pat Woods of San Jose, to its core lineup. Rubin, Mike and Pat are veteran, highly accomplished, professional musicians who have the drive and determination to take Black Angel to the next level of success. Rubin, Mike and Pat have played music in the Bay Area for over twenty years each. Pat was with the band, The Readymades, who opened for many national acts at The Cow Palace, The Fillmore, etc. and was in a touring version of the 1950s band, The Coasters.