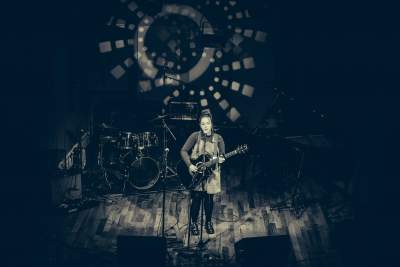 Annie DiRusso is a fifteen year old singer songwriter from the Hudson valley. Annie accompanies herself on the guitar and occasionally the ukulele, she also incorporates a loop pedal into her sets . She has been singing her whole life but she taught herself the guitar at the age of twelve and has been writing songs ever since. She has played shows at places such as The Bitter End, The Towne Crier, The Iguana club, The purple crayon and many other places around the Hudson Valley and Manhattan. Annie made her radio debut in March as a featured artist on WHUD 100.7 and has continued to get airplay on other stations. In 2014 Annie was given a $1000 grant from Keds to pursue her music. Annie gains inspiration from artists such as Ed Sheeran, Bob Dylan, George Ezra, Taylor swift, Passenger, Joni Mitchell, Lorde,Frank Sinatra and Hozier.